Thanks to the power of the internet, advertising is becoming less wasteful and its value more measurable 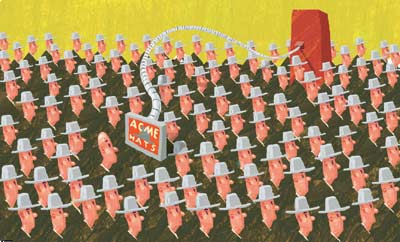 IN TERMS of efficiency, if not size, the advertising industry is only now starting to grow out of its century-long infancy, which might be called “the Wanamaker era”. It was John Wanamaker, a devoutly Christian merchant from Philadelphia, who in the 1870s not only invented department stores and price tags (to eliminate haggling, since everybody should be equal before God and price), but also became the first modern advertiser when he bought space in newspapers to promote his stores. He went about it in a Christian way, neither advertising on Sundays nor fibbing (thus minting the concept of “truth in advertising”). And, with his precise business mind, he expounded a witticism that has ever since seemed like an economic law: “Half the money I spend on advertising is wasted,” he said. “The trouble is, I don’t know which half.”

Wanamaker’s wasted half is not entirely proverbial. The worldwide advertising industry is likely to be worth $428 billion in revenues this year, according to ZenithOptimedia, a market-research firm. Greg Stuart, the author of a forthcoming book on the industry and the boss of the Interactive Advertising Bureau, a trade association, estimates that advertisers waste—that is, they send messages that reach the wrong audience or none at all—$112 billion a year in America and $220 billion worldwide, or just over half of their total spending. Wanamaker was remarkably accurate.