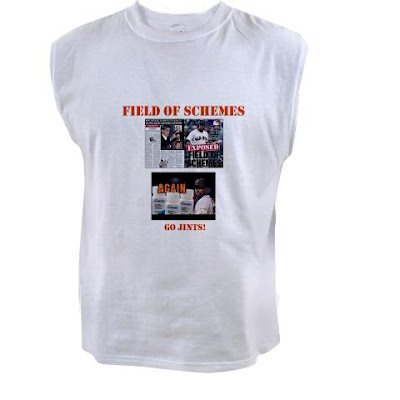 2014 #SFGiants DeJa Vu All Over – Looking Back as They Steal Another world Series:

STEROIDS TO GET TO PLAYOFFS

As an old school baseball purist (and former Giants fan), I’m appalled at the way the San Francisco Giants management continues to sanction and thrive  off PED players – and get   away with it.

Maybe Victor Conte was right. Even if only 25%, not 50% of today’s baseball players are even on some kind of performance enhancing drug, Conte’s hometown Giants are in the forefront with apparently virtually every team player now using.

If you care about drugs in baseball as we do you must cast at least as much blame against GM Brian Sabean and San Francisco Giant’s front office as the players themselves, maymore more. If the Giants were like other teams and tried to discourage drug use these  players in question  wouldn’t even be employed.  Instead of building a team of legit players,Sabean and co. continually go after known and suspected PED players now a decade after Bonds got it all started. Just as Obama blames  problems in society on the previous Bush administration, a Youtube film, etc. instead of taking responsiblity, the Giants cover for their yearly ‘caught’ players, like Mota, claiming he deserves a second chance – make that third chance – all the while the Giants have benefited fromthe successes of their PED players including Mota and Melky Cabrera, even if they lose their services later in the season. So what. They’ve got 5-10 wins directly tied to Cabrera. Go get another player like Scutaro, who if he wasn’t using PEDs before he certainly has been since meeting Cabrera, Mota and joining the Giants. The Giants continually throw together teams of cast-off players otherteams don’t want, who suddenly become stars for ‘mysterious’ reasons

The Stats are there. Player after player, we find the giants averages suddenly have increased

as the season has worn on. themselves, comparing previous years to the current season:

1) MARCO SCUTARO  – Most surprising increased numbers, this for a 37 year old player     playing in the difficult San Francisco  hitter’s park. Batting average up an otherworldly 90 points in a full half season since coming to Giants from Colorado, again hitting in an unfriendly hitters park. But even perhaps more amazing is Scutaro’s strikeout ration, indicative of possible PED use with increased vision and hand-eye coordination ala Bonds; he cut strikeouts down less than half with only 14 strikeouts since coming to San Frnacisco in July – that’s only one strikeout per 37 at bats!

2)  JUAQUIN ARIAS  hit 5 homers for Giants this year after never hitting one before.

4) GREGOR BLANCO who was red hot, ala Torres(2010)  in 2012 for first half of season,  hit more homers this year(5)  than in all previous seasons combined

6) JOSE MIMARES , teammate with Cabrera in 2011 in Kansas City and this year , saw instant success like he had at Kansas City. bringing his ERA down from 4.59 the year before coming to Kansas City to 2.56, where it’s remained with the Giants, ala Melky’s  ratio as a hitter.  . Funny that the Giants would go after another Latin player off Cabrera’s KC team? …and there are other possibles…

POSSIBLE ADDITIONS TO THE ‘CLUB’

Beyond the Latin Connection, above, it’s looking more and more likely that players like Brandons Belt and Crawford may even be involved.

7)BRANDON BELT has seen his average suddenly rise in late season 50,  from from .225 to .275 and even week-hitting

8)BRANDON CRAWFORD – weakest link going up for 20 points from .225 to .246. Other than Crawford and newcomer Pence there’s noone in the starting lineup hitting leass than .275!

9)  Teamates Defended MELKY CABRERA as a hard worker when asked about his suspension. Only Posey admitted Cabrera made a mistake.

10)  All Giants ‘perifpherals, from announcer Krukow saying that he would encourage his sons ‘to get away with whatever they could’ to Sabean, Baer, et al not really coming out against PEDs and continuing to sign large numbers of  known PED users (ie Mota Twice,

And that’s just for starters….